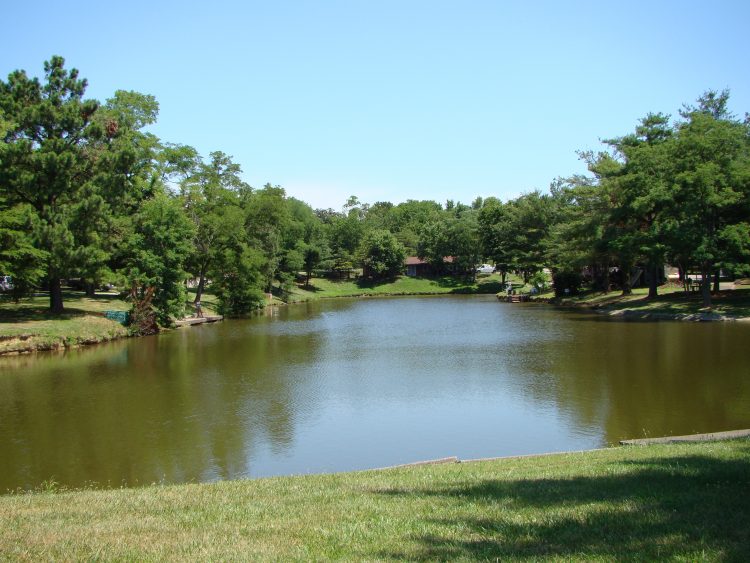 This article was originally published in the December 2011 issue of MotorHome magazine.

After the 1937 flood damaged 95 percent of the town, Paducah, Kentucky was just a wide spot in the road between Monkey Brow and Possum Trot. It now lays claim to being the “Fan Favorite” winner of the 2011 National Trust for Historic Preservation’s Dozen Distinctive Destinations in the US.

I first read about the contest inThe Gazette, the newspaper in my hometown of Colorado Springs.  The article reported that Paducah, population 25,000, was beating eleven other cities, including St. Paul, Minnesota and Colorado Springs, Colorado in on-line voting.  How could this town in Kentucky top our own jewel nestled at the foot of the Rocky Mountains?  It was time to find out.  On a trip to visit family in western Kentucky, we explored sites in and around Paducah and two nearby cities.

Sitting pretty on the confluence of the Ohio and Tennessee Rivers, Paducah is long on small town hospitality and big city marketing savvy.  When city leaders tackled problems, they sought creative solutions.  The drug-infested, decaying Lowertown neighborhood was rehabed through the efforts of the Artist Relocation Program. A nation-wide call went out to artists who would build or renovate existing buildings for residences, studios and galleries. Real estate incentives included 100 percent financing, low-interest loans and architectural services.  The offer drew painters, potters, sculptors and fiber artists, to name a few.

Caryl Bryer Fallert is one of 50 artists living and creating in Paducah who came through the Artist Relocation Program. She is one of the most influential quilters in the world.  In 2009, her quilt, “On the Wings of a Dream,” was the first sewing-machine-made quilt to win Best of Show at the International Quilt Show in Houston, sparking quite the controversy with traditionalists. You could own this history-making piece of fine art for a mere $61,000.  Whether you are an avid quilter or have a mild interest, take time to visit to the Bryerpatch Studio.  Meet this talented woman and see where she creates these works of art.

If you doubt that a quilt could be considered fine art, a visit to Paducah’s National Quilt Museum will convince you otherwise. In 1991, the American Quilter’s Society located its museum in Paducah, now known as Quilt City USA. The museum, which showcases more than 150 quilts at a time in their three galleries, was the surprise highlight of our Western Kentucky trip.  The main gallery rotates their permanent collection of over 200 quilts. The other two galleries house a dozen new exhibits throughout the year. As my husband, Jim, and I strolled through the museum, our vocabulary was reduced to one single redundant word: Wow!

Each April when the dogwoods are in bloom, Paducah hosts the Annual AQS Quilt Show, which draws 35,000 visitors, more than doubling the town’s population.  Textile artisans compete for $122,000 in cash awards. Quilters can browse the exhibits, shop at 400 vendor booths for quilting supplies, and perfect their craft by enrolling in the School of Quiltmaking.  Over 120 classes are offered.

The Army Corp of Engineers built a 12-mile flood wall to protect the city in 1944.  While residents appreciated dry basements, Paducah’s creative minds saw a blank canvas. Muralist Robert Dafford and a team of artists have painted 50 murals over eleven years. The “Wall to Wall” murals cover three downtown city blocks. They depict historical highlights of western Kentucky, including the early 1800s when the Chickasaw tribe claimed the area; 1827 when William Clark of Lewis and Clark fame obtained title to 37,000 acres at Paducah; 1861 when Union General Ulysses S. Grant occupied the town during the Civil War; and the community’s prosperity due to its river and rail facilities.

Civil War buffs may want to include the Lloyd Tilghman House and Civil War Museum in their itinerary.   Bill Baxter, museum administrator, gave us an enthusiastic and informative tour.   We learned that while Kentucky voted to stay neutral during the Civil War, General Grant and the Union army were able to strike Confederate forts due to Paducah’s strategic location on the Ohio River.

Land Between the Lakes

Twenty-five miles southeast of Paducah lies the water wonderland consisting of Kentucky Lake, Lake Barkley and Land Between the Lakes, a 170,000-acre national recreation area. Land Between the Lakes is an inland peninsula formed when the Tennessee and Cumberland Rivers were dammed to create the two lakes. Hillman Ferry Campground on the shore of Kentucky Lake became our home base while we explored this area, a haven for fishing and boating. There is also a large swimming beach. Reservations are recommended.

As soon as we hooked up electric, water and sewer, we donned biking clothes and slathered on bug spray.  While we checked in, the rangers told us about the Canal Loop Trail, a 14-mile single-track mountain bike trail.  The trailhead is at the North Welcome Station, where we picked up a trail map. The Canal Loop is a dirt trail with some exposed tree roots.  We also biked part of the 65-mile paved North South Trail, which runs the entire length of Land Between the Lakes.

After all that biking, we’d worked up an appetite. Several people had told us, “You’ve got to go to Patti’s for dinner.”  When we get that many recommendations, we make a reservation.  More than just a restaurant, Patti’s 1880’s Settlement in Grand Rivers has gift shops, beautiful gardens, miniature golf and a wedding chapel.  The restaurant’s specialty is a two-inch thick charbroiled pork chop.  Jim had the special, and I was perfectly satisfied with the smaller one-inch thick version.  It was so good that we bought ourselves a set of Patti’s seasoning and sauce, and three more to give as gifts.

A Quick Trip to Tennessee

No visit to Land Between the Lakes would be complete without a leisurely drive down The Trace, a scenic 45-mile paved highway that runs the length of the peninsula into Tennessee.  The Elk and Bison Prairie, open dawn to dusk, is best visited early or late in the day when the animals are most active.

Located across the Tennessee state line in Land Between the Lakes is The Homeplace, an 1850’s living history farm. Interpreters in period clothing demonstrate daily chores and activities in nineteenth century farm life. You won’t find any tractors or electric kitchen appliances here.  To a child, 160 years sounds like forever, but once you qualify for a senior citizen’s discount, it’s only two or three lifespans. The Homeplace puts that in to a unique perspective.

Our next stop was Diamond Lake Resort fifteen miles southwest of Owensboro.  Although campers have been coming to Diamond Lake for decades, recent changes have drawn praise from locals and visitors alike.  When Janice and Brian Smith and Laurie and Joe Meythaler bought the RV resort six years ago, they made major upgrades and filled the calendar with special events from April through October.

The new 750-seat Good Time Theater has family-oriented bluegrass concerts most Saturday nights in season.  Three go-kart tracks are open to kids of all ages, from five to “100 years or so.”  If you’d rather watch, come for the Grand Prix.  In July, this professional go-kart race attracts over 100 drivers who race at speeds reaching 95 miles per hour on their streets. The big event, however, is in August.  Thousands of visitors come to see over 600 cars displayed in the Street Legends Car Show. RV sites for this event are booked by January.  September brings the Grillin’ and Chillin’ BBQ Cook-off, Kentucky’s only state sanctioned Barbecue Championship, with teams from several states competing for over $10,000 in prize money.  Reservations are recommended.

Barbecue Capital of the World

Owensboro is well known for its barbecue.  On the second weekend in May, it hosts the International Barbecue Festival.  Local charitable organizations raise funds to support their causes.  Competition is fierce among Catholic churches to claim titles for Best Overall, Mutton, Chicken and Burgoo.  For the uninitiated, burgoo, a Kentucky favorite, is a tasty stew made with mutton, chicken and vegetables.  Barbecue fans are a loyal bunch.  For the seventh year, Noel Keith drove almost two hundred miles and arrived three hours early to secure his place with a lawn chair at the front of St. Mary Magdalene’s line.  In addition to plenty of good food, there is entertainment on three stages, carnival rides and a car show.

If you love barbecue but can’t make it to the festival, never fear.  Stop by the Visitors Center to get the Daviess County Barbecue Schedule.  Most Saturdays from May to September, one of the Catholic Churches will be hosting a barbecue picnic. If that doesn’t work, you can always go to the Moonlite Bar-B-Q Inn.  You’ll recognize it by the mouth-watering aromas and the huge black kettle that sits out front proclaiming Owensboro to be the Bar-B-Q Capital of the World.  Once inside, you may recognize a few famous faces in photographs of previous customers, including former President Bill Clinton and Pope John Paul II.

Bluegrass is the official state music of Kentucky, and Owensboro has the official museum to honor it.  The International Bluegrass Music Museum pays tribute to Bill Monroe, also known as “The Father of Bluegrass.”  The Bill Monroe Centennial Art Exhibit, which will be displayed until September 15, 2012, is the result of an invitation to visual artists to share their interpretations of a Monroe song. Permanent exhibits include the Bluegrass Hall of Fame, the Timeline of Bluegrass Music, and a variety of musical instruments.

In nearby Henderson, John James Audubon State Park is a must-see for bird watchers.   The Museum houses the world’s largest collection of Audubon artifacts, including the magnificent double-elephant folio (27 by 40 inches) of the Birds of North America. The Nature Center includes a wildlife Observation Room; Discovery Center with hands-on exhibits; and Learning Center where naturalists conduct environmental programs.  In the spring, over 20 species of warblers can be spotted from the Observation Room or while hiking the 6.5 miles of trails.   There is also a 9-hole golf course and a campground with water and electric hook-ups.

Western Kentucky is beautiful, lush and green.  Its people, proud, resilient and creative, make it even more attractive.

Congratulations, Kentucky.  This Coloradan tips her hat to you.