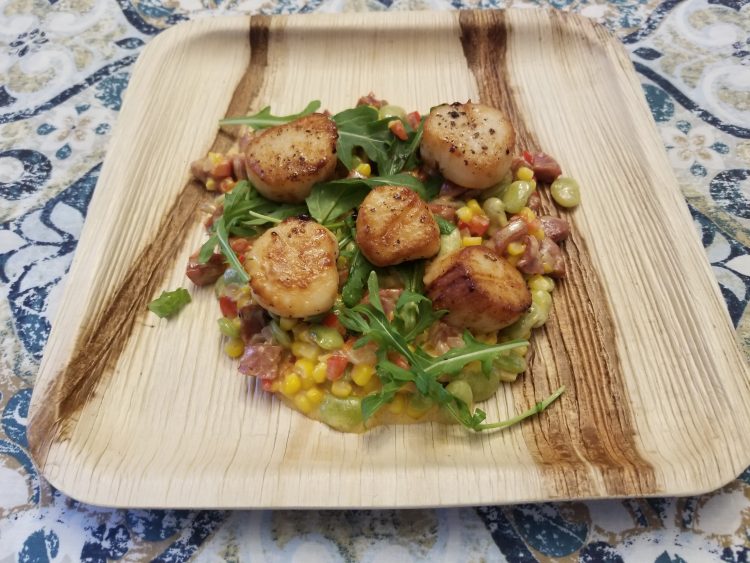 Prior to my introduction to pan-seared scallops with Cajun succotash, I always thought succotash was simply a boring vegetable dish with two ingredients: corn and lima beans. To my delight, Cajun succotash is made with andouille sausage, onion, roasted red bell peppers and heavy cream, as well as the expected veggies. Andouille is an ingredient often used in Louisiana Cajun cuisine.

We first had scallops with Cajun succotash years ago when friends gave us cooking lessons at a now-defunct cooking school. It was more like a demonstration since we watched the chefs do their thing rather than participate in the food preparation.  That was fine with me since it left my hands free to take copious notes, and we got to eat the finished product.  Since then, it’s become my favorite way to prepare scallops.

When I have the exact ingredients, it’s a real treat. I’ve found several substitutions for those occasions when I can’t always get what I want. (That reminds me of a Rolling Stones song.) Watercress, an aquatic leafy vegetable that grows in cool, shallow streams, isn’t always available in supermarkets. It has a peppery flavor, similar to arugula. I’ll use baby arugula when watercress is nowhere to be found.

Usually uncooked andouille sausage is readily available, either in casings or bulk. The last time I made this dish, I could only find fully cooked sausage. Get uncooked sausage when you can, but the cooked stuff will do in a pinch.

One of my bad habits is not carefully reading recipes. (See 10 Mistakes You Don’t Want to Make in Your One-Butt Kitchen.) When I was making my grocery list, I saw “red bell pepper” and put that on my list. When I was cooking, I realized that the ingredient was actually “roasted red bell pepper.” Those come in a jar and, in my opinion, have more flavor.  Get the ones in a jar when you can, but fresh ones will do.

I’ve used lima beans and edamame. I have a slight preference for edamame.  If you can find shelled edamame, get it. If you have to shell it yourself, that will add 15 minutes to your prep time. (That’s when I opt for lima beans.)

Nothing special for this one

Pat scallops dry with paper towels.  Sprinkle salt and pepper on scallops. Heat oil in large non-stick skillet over high heat until oil is hot.  Sauté scallops until golden brown, about 3 minutes per side. Be careful not to overcook. Do not overcrowd pan. Transfer scallops to plate, cover with foil, and keep warm in 200 degree oven. Scrape most of the brown residue from the pan before moving on to the next step.

For more information on pan searing scallops, go to http://culinaryarts.about.com/od/fishseafood/ss/searseascallops.htm.

If andouille sausage came in casings, remove them.  Crumble the sausage and brown it over medium heat. Add diced red onion to pan, and sauté until translucent, not brown.  Add edamame or lima beans, corn, and roasted red bell peppers.  Cook until warm.  Add cream and sea salt.  Simmer 3 minutes.

Divide succotash between two individual serving plates. Arrange watercress or baby arugula on top of succotash. Top each serving with half of the scallops. In addition to adding eye appeal, the watercress or arugula adds peppery flavor.