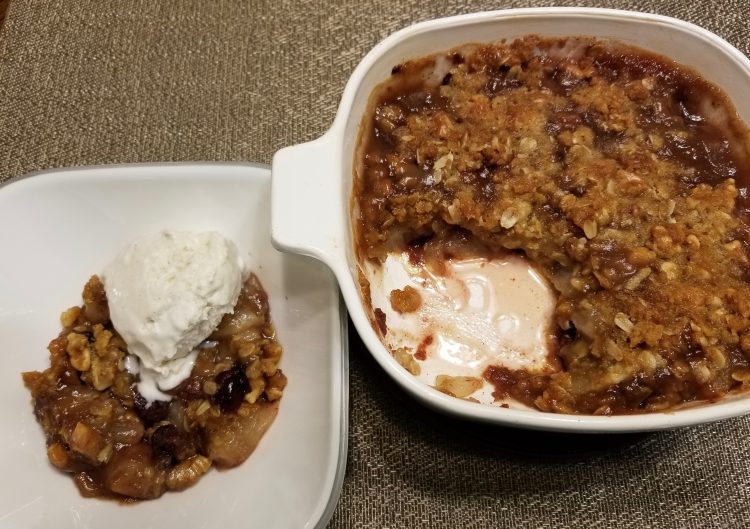 When friends sent us a dozen Harry & David Bosc Pears for Christmas, I used several of them right away in two of my favorite salads: Pear Date Salad and Pear Blueberry Salad. That still left enough to make pear crisp for dessert three times over the next two weeks. Each time I tweaked an old recipe a little bit until I came up with this one.  I had some Craisins® Original Dried Cranberries on hand that needed to be used up. I loved the combination of flavors and textures.  Craisins® with 50% less sugar tasted just as good as the original, and they eased my conscience a bit about enjoying this sweet dessert. Now pear cranberry crisp is my favorite pear dessert.

When friends told me they couldn’t eat rolled oats, I found quinoa flakes can be used as a substitute. It was tasty! Although I admit a slight preference for the texture of rolled oats, I’ll make it with quinoa flakes again since I had to buy a pound and only used ¼ cup.  If you want to try quinoa flakes, I’d be happy to share mine.

The last time I made it, I forgotten I used all of the vanilla on the previous batch. No problem! I substituted Grand Gala Orange Liqueur. I don’t know if it was the cranberries or the orange liqueur, but the last one was everyone’s favorite. 😋

In the bowl you just used, mix the butter, flour, rolled oats, brown sugar, sugar, nuts and salt. Use your fingers to sprinkle the topping evenly over the pear mixture.

Bake 35 to 40 minutes or until the topping is crisp and the filling is bubbly.