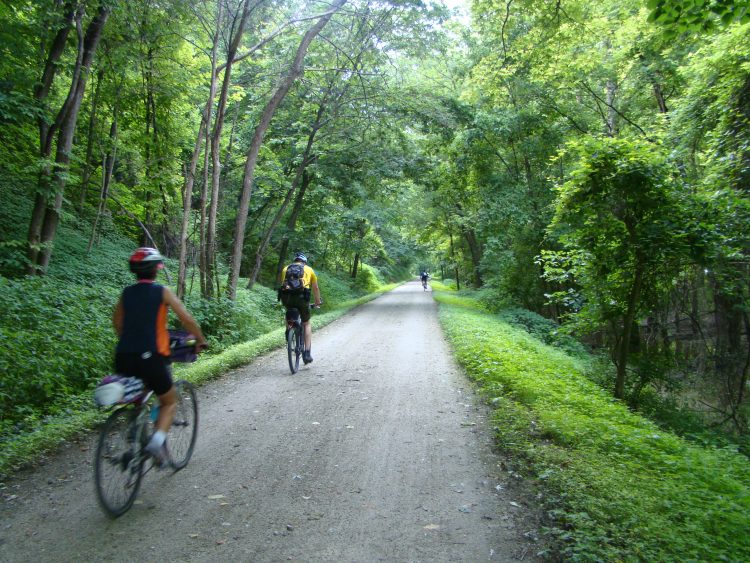 “Missouri’s Katy Trail” was originally published in the March 2017 issue of MotorHome Magazine.

A delight for bicyclists, hikers and sightseers alike, Missouri’s Katy Trail is also a must-see for RVers.

Katy Trail State Park is the longest contiguous rails-to-trails conversion in the US. The park is 240 miles long and 100 feet wide. Lush forests provide shade for much of the trail. Running mostly along the banks of the Missouri River, it’s relatively flat, with a mere 500 feet elevation gain over the length of the trail. The surface is crushed limestone, suitable for mountain bikes, hybrids, recumbents and road bikes. To me, that sounds like the ideal bike trail. I’ve wanted to ride the entire trail ever since we rode a short section of it in 2006 while attending an RV rally in Sedalia.

The only question was how.  Should we use our motorhome as a base camp, moving it each day to a different RV park along the trail? Sign up with a tour organizer that arranges stays at bed-and-breakfasts and shuttles luggage to the next location? Pull a bicycle trailer with all our camping gear? Register for one of the 350 spots on the 2015 Katy Trail Ride in June, sponsored by the Missouri State Parks? While all of the options had their good points — with the possible exception of pulling a bicycle trailer (at my age? No way!) — we chose the last one.

Online registration for the annual Katy Trail Ride opens March 1 each year. (The ride fills up quickly. If you want to go, register early.)  The route goes east from Clinton to Saint Charles on odd years and reverses direction on even years.  The overnight stops in between vary each year.  Breakfast and dinner each day, tent camping sites, hot showers and a gear shuttle are included in the registration fee. We also signed up for the optional shuttle back to our starting point.

When my husband, Jim, and I were packing for our trip, we couldn’t find our tent.  Rather than buy a new one, we signed up with Padre’s Cycle Inn, a service that provides the tent, sets it up in the afternoon, takes it down in the morning, provides air mattresses, chairs, towels, a cell phone charging station, cold water and snacks. Each afternoon our luggage was delivered to our tent. Dawn and Erica worked their fannies off for us, with a laid-back attitude and a great sense of humor. In retrospect, I was so happy we couldn’t find our tent that Jim briefly wondered if I’d hidden it. (I didn’t. Honest!)

Since this five-day bike ride gave us an excuse to do a six-week RV trip, we needed to leave the motorhome somewhere during our ride.  Bucksaw Resort and Marina on Lake Truman near Clinton has 100 RV sites with full hookups. The resort was busy with fishermen who were there for the Bass Pro Shops Crappie Masters’ Ultimate Challenge. We were lucky to get the last RV site.

During the week, I met several people who were driving RVs or other vehicles to support spouses or friends doing the ride. Registered non-riders can park their RVs (no hookups) on blacktop surfaces at each campsite location during the organized ride. If you opt to use an RV, check with ride officials for length restrictions. Detailed directions to SAG (support and gear) stops, which were about every ten miles on the trail, and overnight locations are provided to registered non-riders. Depending on which cities are selected for overnight locations each year, RV parks could be nearby or as far away as 20 miles or more.

Sherry Aden has supported her husband Kerry every year since 2001. She enjoys the art galleries, wineries and antique stores in the charming towns along the route, and the after-ride socializing. The towns of Hermann, Augusta, Mount Pleasant and Saint Charles are favorites with the non-riders.  In 2011, Forbes Magazine named Hermann one of the prettiest towns in America.  The Hermann Trolley picks up visitors at various locations and delivers them to five local wineries and a brewery, which would be a good alternative to driving an RV on some of the narrow roads.

Riders and non-riders alike looked forward to the activities available after each day’s ride. We cooled off in the swimming pool at Liberty Park in Sedalia.

For people who signed up early, a bus took them to Bothwell Lodge State Historic Site.  Unfortunately for us, the tour was full by the time we tried to sign up.  Several people who were on the tour gave enthusiastic accounts of the 31-room, 12,000-square-foot lodge built atop two natural caves.  It’s on my list of things to do the next time we bike the Katy Trail.  Luckily for us, additional spots opened up on the optional tour of Warm Springs Ranch, the breeding facility for the Budweiser Clydesdales near Boonville. We enjoyed seeing the magnificent horses and drinking the beer that’s poured from the tap at 31 degrees.

The History of the Katy Trail

One evening after dinner, Jim Denny, the Missouri Department of Natural Resources’ (DNR) first Katy Trail manager, told us the trail’s history.  After flooding in 1986 damaged the Missouri-Kansas-Texas Railroad’s tracks from Sedalia to Machens, a new route was built and the right-of-way was to be abandoned. The DNR purchased the right-of-way with a $2.2 million donation from Edward “Ted” Jones (son of founder of the Edward Jones investment company) and his wife Pat. This was controversial with the landowners who had expected the land to revert to them. After much opposition, the first section of the trail opened in 1990.

Ed Bielik, an 86-year-old rider in our group, began hiking the Katy Trail in the midst of the controversy while it was being built. Often he would encounter barbed wire strung across the trail.  He would throw his backpack over the barrier and continue. Landowners were always friendly to him, even though they were opposed to the trail. He has hiked the trail six times and biked it 20.

Most days the riding was as easy as I’d hoped, but one day it was as challenging as I’d feared. The first day was the hardest for me, but the trail itself was no more difficult than any other section. If I told you all my excuses, you’d ask, “Would you like some cheese with that whine?” Suffice it to say I was slow. I passed three riders all day; the other 300-plus, which included two 10-year-olds and the 86-year-old man, passed me.

The second day was awesome. I slept better, in spite of the heat and bedsheets that never dried in the high humidity. After six attempts by three bike mechanics, my brakes quit dragging and squeaking. The trail itself was mostly shaded by a canopy of trees.  I felt a burst of energy, passing some of the people that flew by me the day before, even the 10-year-olds.  Jim told me I was going faster uphill than I was going downhill with a tailwind yesterday.

On the third day, I felt strong for the first 50 miles. That’s when I realized I’d left my helmet at the last SAG stop.  Jim and I backtracked, adding about 6 miles to the trip.  That night’s campsite was about 1.5 miles from the trailhead up a steep, paved road.  They offered a bus (fondly referred to as the “Shuttle of Shame”) to the campsite, which we happily took.

After hearing rave reviews about the Missouri Wine Country, we had lunch at the Lost Creek Vineyard near Hermann. The vineyard has 12 acres of Chardonel and Noiret grapes.  We also stopped at an open house at the Peers Store about 5 miles before Marthasville. It opened in 1896 and served as a general store until 2012. Dan and Connie Burkhardt bought it in 2014. On hand for the occasion, Dan said, “I wanted to make something interesting along the Katy Trail instead of bulldozing it.”  While looking at the art and memorabilia, we enjoyed “hillbilly chamber music” performed by a trio called the Bluegill Buddies.

The fifth day started the same way the fourth day ended, with a thunderstorm.  Around 5:30 a.m. as we were packing our bags, Dawn walked though the campsite yelling the news that the trail was closed due to flooding and the last day of the ride was canceled. We put our bikes on a truck and took a bus to Saint Charles.

While I would have liked to finish the ride, I was pleased that we had time to check out Saint Charles and learn about its history. A statue of Daniel Boone sits near the Trail to Fort Osage marker which describes the earliest trail used by American settlers heading west. Boone is most famous for his exploration and settlement of what is now Kentucky. He spent the last years of his life near Saint Charles. In Frontier Park, a larger-than-life bronze statue of Meriwether Lewis, William Clark, and Clark’s Newfoundland dog, Seaman, reminds visitors that Saint Charles was the final embarkation point of the Lewis and Clark Expedition in 1804. Those famous explorers walked these brick-lined streets to buy supplies for their expedition.

The historic and picturesque Main Street is still paved with bricks, but the frontier stores have been replaced by trendy shops and galleries.  I bought a bottle of margarita-flavored white balsamic at an olive oil and vinegar emporium.  We visited a quilt shop with so many pretty fabrics it almost made me want to take up quilting. Jim and I each bought chocolates at two different candy shops; it’s easy to justify such an indulgence after riding a bicycle 200 miles. I visited an art gallery featuring Missouri artists. The art was so beautiful and unique I gasped with delight.

Soon it was time to take the bus back to Clinton. We were thrilled to be back in our motorhome and luxuries like dry sheets, air conditioning and electric toothbrushes.

The Katy Trail was as scenic as I’d imagined. We enjoyed views of the swollen Missouri River — flowing rapidly, muddy, and dotted with flood debris — and the bluffs on the other side of the trail from the river.  There was ample evidence of recent flooding: swamped cornfields, downed trees, trail damage.

Despite this, the area along the entire trail was beautiful. The forest was lush and dense. Patches of daylilies stood out among the greenery. We spotted cardinals and redwing blackbirds. Jim identified the songs of eastern jays.

The Katy Trail Ride was a marvelous adventure.  We’ll do it again, perhaps independently, using our motorhome and allowing an extra week to check out nearby towns and attractions. It would be a spectacular ride with fall colors.

RVing on the Trail

If you’d like to use your motorhome as a support vehicle for biking or hiking the Katy Trail, the following facilities are conveniently located.  For a full list of camping options, go to http://www.bikekatytrail.com/planner.aspx.