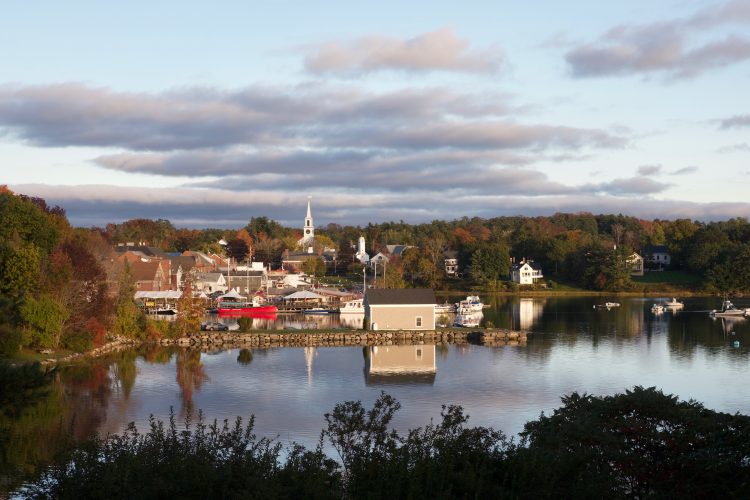 This article was originally published in the September 2019 issue of MotorHome Magazine.

The coast of Maine had been high on my list of places to explore ever since we bought our first motorhome in 2002. Sixteen short years later — time flies when you’re having fun — my husband, Jim, and I finally made it happen.

Hadley’s Point Campground was our home base on Mount Desert Island. (Desert is pronounced “dessert,” as in a piece of pie.) It has more than 140 RV sites, plus cabins and tent sites. All of the RV sites have electric and water hookups. Some have sewer, and a honey wagon service is an option for those that don’t. The campground is a five-minute walk to Hadley Point, a public saltwater beach. Island Explorer, a free shuttle service to Bar Harbor, Acadia National Park, and other locations on the island, stops at the campground.

On our first morning in Maine, we hopped on the Island Explorer bus that dropped us at the Village Green in Bar Harbor. From there it was a short walk to the Town Pier where we picked up our tickets to the Oli’s Trolley two-and-a-half-hour narrated tour of Acadia National Park. Acadia covers more than 49,000 acres, which was all donated by wealthy families who wanted to preserve the land. John D. Rockefeller, Jr. financed the construction of 45 miles of carriage roads and 16 bridges for people who wanted to travel by horse or carriage without encountering motor vehicles.  The Fire of 1947 burned more than 10,000 acres in the park and 170 homes and five hotels in Bar Harbor.  As a result of the fire, deciduous trees now outnumber coniferous, which means more brilliant colors in the fall.

The tour included three 15-minute stops. The first was Thunder Hole, a narrow inlet where water rushes into a small cave. When conditions are right, waves shoot up as high as 40 feet with a thunderous roar.

Jordan Pond, a tarn formed by a glacier, was our next stop. We took a quick hike down to the pond on the Shore Trail. The water is clear, with visibility normally 46 feet, sometimes more. Two mountains known as “The Bubbles” sit on the opposite shore.  Visitors can enjoy popovers and tea on the lawn at the Jordan Pond House, a tradition since the 1890s.  When all the passengers returned to the trolley on time, our tour guide rewarded us by showing an amazing photo he took of the Northern Lights over Jordan Pond.

Our final stop was the summit of Cadillac Mountain. At 1,530 feet, it’s the highest peak on the North Atlantic seaboard.  From October 7 to March 6, it’s the first place to view the sunrise in the US. Even though we missed that, we enjoyed the panoramic view of the mountainside and the islands and cruise ships in Frenchman Bay.  Seeing the long line of cars waiting for parking was one more reason to be glad we took Oli’s Trolley. Another option is the Island Explorer buses that pick up riders at the Hulls Cove Visitor Center in the park. If you want to leave the driving to someone else, there’s plenty of room for cars and RVs in that parking lot.

Back in Bar Harbor, we asked for a restaurant recommendation with good lobster. Our guide suggested the Side Street Cafe. As we were nearing the restaurant, I pointed to a building and said, “I think that’s it.” A couple passing us said, “If you’re looking for great lobster, you found it.” We shared the lobster mac and cheese and a lobster melt, which is a grilled cheese sandwich stuffed with lobster.

That delicious meal was the perfect prelude to a two-hour tour on Lulu’s Lobster Boat.  We boarded the Downeast-style lobster boat and headed out to sea. We passed Egg Rock Light, a lighthouse on a small island in Frenchman Bay.  When it was time to check the lobster traps, there was a male big enough to keep. The tour guide asked for a volunteer to band the lobster. I raised my hand and was given instructions on how to use the banding tool to put rubber bands on the claws.  The bands kept the passengers safe when the lobster was passed around for all to hold.  Since Lulu’s is an educational trip, they release all lobsters they catch. This lobster went back into the water to live another day, without the bands, of course.

For dinner, we went to another restaurant Oli’s guide recommended. Fish House Grill is a casual place, right on the waterfront. I ordered the New England bake. For the first time in my life, I had lobster for lunch and dinner.

The next day we continued our exploration of the island by car. Asticou Azalea Gardens in Northeast Harbor is reminiscent of a Japanese stroll garden.  It was created in 1957 by Charles Savage, a Maine resident with a passion for Japanese gardens. Early financial support came from John D. Rockefeller, Jr.  From May to June, the garden is ablaze with colorful azaleas and rhododendrons.  Even though the flowers were no longer in bloom, and the trees were just starting to show their fall colors in late September, it was a sight to behold.  Trees were reflected in the glassy surface of Asticou Pond. The carefully-raked Sand Garden instilled a sense of calm.

On our last day in Bar Harbor, we went back to Acadia to check out those famous carriage roads. Our options were signing up for a horse-drawn carriage tour, hiking, or biking. We left our car at Hulls Cove Visitor Center and rode our mountain bikes on a wide gravel road past Witch Hole Pond.

We stopped to admire Duck Brook Bridge, one of 16 Rockefeller bridges. This was was the tallest and the most expensive to build. It has three arches and four turret-style viewing platforms. Some of the trees around the bridge had turned a brilliant red.

One of Jim’s favorite places on Mount Desert Island was the Seal Cove Auto Museum. Richard Paine amassed an extraordinary collection of 200 automobiles, trucks, and motorcycles. After his death in 2007, a portion of the collection was sold at auction to fund an endowment to care for the remaining vehicles. The nonprofit museum Paine established continues to preserve his core collection of more than 50 Brass Era cars built between 1895 and 1917. They feature prominent brass fittings for things like lights and radiators. The exhibits change every two years. In 2018 and 2019, the theme is “Art, Advertising and the Automobile.” This exhibit “tells the story of automobile advertising and design, the social trends that shaped the ads, and the talented artists and illustrators who created them.”

The Happy Clam Shack caught our attention several times as we left the RV park. It’s a small restaurant covered with lobster buoys. A little lighthouse sits out front. On our last evening in Bar Harbor, we stopped to order a to-go meal: two smoked lobsters, clams, and corn on the cob. We ate in our motorhome, marveling at how many ways there are to cook lobster.

I was surprised to learn this delicacy was once considered trash food. On the New England coast, these “cockroaches of the sea” were used as fish bait or fed to prisoners and servants. When railroads started to serve canned lobster, people who didn’t know they were eating poor man’s food found they liked it.

We moved the motorhome about 100 miles south to Shore Hills Campground in the Boothbay region. We had a nice pull-through spot next to a pond. Each site had its own trashcan, which always impresses me. The campground is just over three miles from Boothbay Harbor, a charming town worth visiting.

Coastal Maine Botanical Gardens occupied us for most of the next day. It sits on 295 acres of tidal shoreland near the Black River. In early October, there were still some flowers in bloom, but the predominant colors were green and orange from the trees and pumpkins.  Stacks of pumpkins were artistically arranged in numerous places. The trails wandered past themed gardens and sculptures by regional artists.  In the Fairy Village, I wished I had some children along so we could build fairy houses together.  Jim and I sat near the waterfall in the Giles Rhododendron and Perennial Garden and appreciated the serenity of our surroundings.

The following day we headed to Portland, the US city with the most craft breweries per capita. On the way, we noticed a crowd of people standing in line at Red’s Eats in Wiscasset. Several people had told me it’s a must-do when visiting Maine, but I didn’t think we’d have time to squeeze one more thing into our itinerary. “That’s Red’s Eats,” I said. “Let’s find a parking place.” I’d heard you could stand in line for two or three hours, but the line didn’t look that long to me. I was right. It only took an hour to get a lobster roll at the “world’s best lobster shack.”

Allagash Brewing Company offers free tours and tastings.  Reservations are recommended. In the mid-1990s, founder Rob Tod noticed German- and British-style beers had become popular in the US, but Belgian beers were hard to find. He sold his first batch of Allagash White, a Belgian-style wheat beer, in 1995. Today, the company is “dedicated to crafting the best Belgian-inspired beers in the world.” We learned about the brewing process, the company’s commitment to sustainability, and giving back to the community. Allagash was named one of Outside Magazine’s 100 Best Places to Work in 2017.

Our Maine visit ended with a few days at Sandy Pines Campground in Kennebunkport. The lodge has one of the nicest lobbies I’ve ever seen at an RV resort. Sandy Pines has more than 300 sites, including glamping tents and park models. The sites are nestled in the trees so you only see a few of your neighbors. Amenities include a heated saltwater pool, playground, lawn games, bike and kayak rentals, and a general store with grocery and gift items.

The Ogunquit Marginal Way is a paved walking path about 20 miles south of the campground.  The mile-long pathway follows the “margin” between the land and the sea in the artsy resort town of Ogunquit. There are 39 benches along the way where you can sit and admire the panoramic view.

We signed up for a fall-foliage kayak tour with LL Bean. After the group had assembled at the Flying Point Paddling Center in Freeport, our guides, Allie and Kelly, gave us a short paddling demo.  Double kayaks were waiting for us on the dock in Casco Bay. We paddled out to Sisters Island where a herd of seals entertained us with their antics. At Williams Island, eagles soared overhead. On Pettengill Island, we stopped for snacks and watched loons, cormorants, and great blue herons fishing for their next meal. Seeing the wildlife on this gorgeous fall day made up for the lack of color in the trees. Even though it was October, there were only a few trees on the shore in their fall splendor.

The Portland Head Light on Cape Elizabeth began operating in 1791, one of the first lighthouses along the eastern seaboard.  The former keepers’ house is now a museum, telling the history of the lighthouse with artifacts, photographs, models, and Fresnel lenses.

We departed the day the Sandy Pines Campground closed for the season. Lots of people were saying heartfelt goodbyes, promising to return.  It made me want to run back and make a reservation for next year.