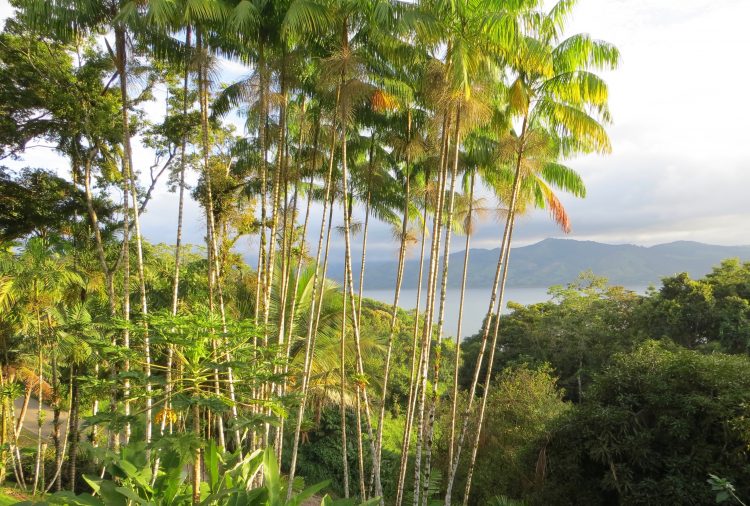 My husband, Jim, and I had never been to Costa Rica until April 2001, but five months later we returned as inn-sitters to allow the owners to take a vacation.  We had no experience as innkeepers.  We didn’t speak the language.

How did we get this sweet gig? I simply asked the right question at the right time.  We were staying at the Villa Decary, a beautiful bed and breakfast owned by two American men.  The first morning at breakfast I asked Bill and Jeff if they ever get away for vacation since I’d always wondered if owning a B&B was like wearing a ball and chain.

“Oh sure, we take three or four months a year,” Bill said.

“What do you do with your inn while you’re gone?”

“We get friends or former guests to run the place.”

“And we’re still looking for someone for the fall,” Jeff added.

That’s all it took to convince Jim and me to come back. For two months in the offseason, we would take care of an inn with five guest rooms in the main building and three private casitas.  The property sits on seven acres overlooking Lake Arenal.  Costa Rica was paradise to us, and we were excited to return.

Jim and I took a crash course in Spanish so we could converse with the five employees who spoke little to no English.  Since we would be there during the offseason, we encouraged family and friends to take advantage of the discounted rates.

Eight days before we were due to leave, high hopes were replaced by heartbreak. September 11, 2001. Terrorists destroyed the World Trade Center and attacked the Pentagon. Planes were grounded. Our nation grieved.  I prayed.

After several days of uncertainty, we decided to follow through with our commitment. Bill and Jeff gave us a few days of training when we arrived.  Our job was to talk to guests (all of them spoke English), cook breakfast, shop for groceries, make reservations, and handle the money. The employees cleaned rooms, washed dishes, and maintained the grounds. I learned to make their famous egg loaf for breakfast, which also required baking a loaf of bread for croutons to be included with the eggs, vegetables, and cheese.

Shortly after the owners left, our first guests arrived. I thought this would be so easy. Why did I have butterflies in my stomach?  Since the guests wanted breakfast at 7:00, I got up at 5:30 to prepare the fresh fruit plate and egg loaf. Our first official breakfast was a success! I gave Jim and the staff high fives after our guests departed.

Since we were just five months into our Spanish lessons, we were never far from our dictionary. With our meager vocabulary, simple hand signals, and sincere smiles, we managed to befriend the staff.

Three of the staff played on their local soccer teams. One Friday evening Mainor, Manuel, and Jose had a big game in their hometown. They invited Jim to watch the game.  While Jim was impressed with Mainor’s ball-handling abilities and Manuel’s speed, he was more impressed with what happened after the game.  The two teams were genuine in extending their congratulations to each other.  Players expressed enthusiasm about good plays on both teams, not just by the team who made the play.  Players from opposing teams walked off the field with their arms slung over each other’s shoulders.  The smiles on their faces came from the love of the game, not the thrill of victory.

Annona is not only the most exotic-looking fruit we ate in Costa Rica, but it was also the tastiest. An Annona varies from the size of an orange to the size of a cantaloupe, and it’s covered with soft horn-like spikes.  A tall Annona tree near our casita only gave us one ripe fruit during our stay.  Annona is sweet and creamy, not quite like sweetened condensed milk, but it’s the closest thing to describe the rich flavor and smooth, velvety texture.  Since Annona is a delicacy for monkeys and birds as well as humans, we kept a close watch for hints of another yellow fruit in the tree, to no avail.

One night after dinner, I stopped in the bathroom.  As I was leaving, I noticed an apparently dead scorpion behind the door.  He was flat as if someone had stepped on him with a big boot. I grabbed my camera and asked Jim to join me.  He passed the door over the flattened scorpion a couple of times. It was as still as a corpse.  Jim asked, “What makes you think it’s dead?”  I said, “Well, of course, he’s dead.  He’s a flat as a pancake.”  I tapped my camera near his squashed little head to prove it.

Imagine my surprise when he puffed up his full-body attack armor with stinger fully erect and twitching and ran toward us. I jumped back, then flew out of the bathroom in a single leap. I accidentally turned off the light as I fled leaving Jim alone — wearing sandals — in a darkened room with an angry scorpion. Jim was as still as a church mouse; I was screaming louder than a howler monkey.  Always calm in the face of crisis, Jim managed to find the light switch, step on the scorpion, and flush him down the toilet.

We saw six more scorpions during our stay. Each encounter had its own high drama. Near the end of our trip when Jim’s parents and siblings were visiting, a scorpion hiding in the sleeve of my rain jacket stung my thumb. Jim’s family and the employees were compassionate and helpful. To tell the truth, it was more like a bee sting than the excruciating pain I’d imagined.  If I would have known early on how mild these scorpion stings were, I could have done that trip with a lot less whooping and hollering.

Except for the scorpions, it was like paradise. The creatures of the rainforest were a constant source of enchantment, amusement, and sometimes terror. We admired the brilliantly colored parrots and toucans and envied the graceful and silent flight of vultures. Initially, the growl of howler monkeys sounded scary, but we grew to love it since it meant those playful creatures were in the treetops nearby. A pair of Central American white-faced capuchin monkeys approached our kayaks, begging for treats. After seeing their sharp teeth, I kept my distance, but our guide let them drink from a spare water bottle.  I stood my ground between an uninvited coatimundi, a furry little four-legged beggar who came into the dining room during breakfast, and the guests eager to feed him. Jim joined forces with the inn employees and a neighboring farmer to capture a runaway cow.

It didn’t happen every night, but sometimes the beauty of nature gave a command performance. I had no choice but to drop everything and watch the sunset through Maxfield Parrish eyes. White, rose and apricot clouds stood out against a brilliant and constantly changing blue sky. Lush greens of the grasses and trees on the rolling hills of the distant shore were different in each moment as we watched them. Light on the trees outside the Villa competed for our attention. In ten or fifteen minutes the show would end and we were released to go on with the task at hand.

The Lake Arenal area offers plenty of outdoor adventures: zip lining, rafting, kayaking, and hiking.  Before and after our inn-sitting gig, we did two zip line tours and one rafting trip. On days when we didn’t have guests, we could slip away for short hikes through the rainforest.

On one particularly slow day, we managed to get in a memorable kayak outing, courtesy of Elkin, our Tico neighbor. Jim, Elkin, and I went kayaking on Lake Arenal for several hours, hugging the shore looking for monkeys and birds in the dense bamboo groves and papaya trees.  We explored little coves and found beautiful water lilies. Most of the time the weather was overcast but dry and still, not a ripple on the water.  When a light rain turned into a fifteen-minute, paddle-for-cover downpour, we found some relief under a bent bamboo tree.  We got wet, but not cold.

Rainy Season in a Rainforest

Since we were in the rainforest during the rainy season, we expected there would plenty of wet days. During our first three weeks, we had a few light rain showers. Late one afternoon we had our first real rainstorm. It had been a hot and humid day with the temperature hitting the high eighties.  We sat outside Casita Zombia to watch the howler monkeys eat the leaves of papaya trees fifteen feet from the veranda. Our location presented us with a perfect view of the storm moving across the lake.  The temperature plummeted six degrees, but there was no reason to change into a shirt with sleeves.  Lightning was flashing and crashing all around us.  It felt like rainy season in a rainforest.  In just over 90 minutes, the rain gauge measured four inches.

During our two-month stay, fifty percent of the guests who had booked reservations canceled due to the terrorist attack. Some of the guests who did come were from New York City and were eager to share their stories.  Winston had been walking to his office in a building next to the World Trade Center Towers after the first plane hit.  When the second plane hit, he ran away so fast he lost one shoe. With a catch in his voice, he whispered he had seen his missing shoe on TV.  In his glistening eyes, I saw his grief for greater losses and his gratitude for life.

Tabacon Hot Springs was a place of refuge for many of our guests. The resort, a 40-minute drive from Villa Decary, sits next to Arenal Volcano National Park. Lush gardens surround five mineral springs heated by nearby Volcano Arenal. To celebrate the successful completion of our inn-sitting duties, we relaxed under the cascading thermal waterfalls, slid down the water slide, and drank “coco locos” from green coconut shells while sitting on barstools in the warm water.  At the spa, I got a volcanic mud wrap, body polish, massage, and facial. Occasionally we saw the steam coming out of the volcano.

Jim and I often think about what a gift we were given, a stay in paradise with sufficient time to breathe it in. Even after all these years, memories of that adventure remind me to appreciate the ordinary beauty of everyday life.  Bears and blue jays that frequent my back yard in Colorado fill me with the same sense of wonder that I had for the monkeys and toucans in Costa Rica.  Trying local foods where ever our travels take us and recreating the recipes at home temporarily transport us to another place and time.