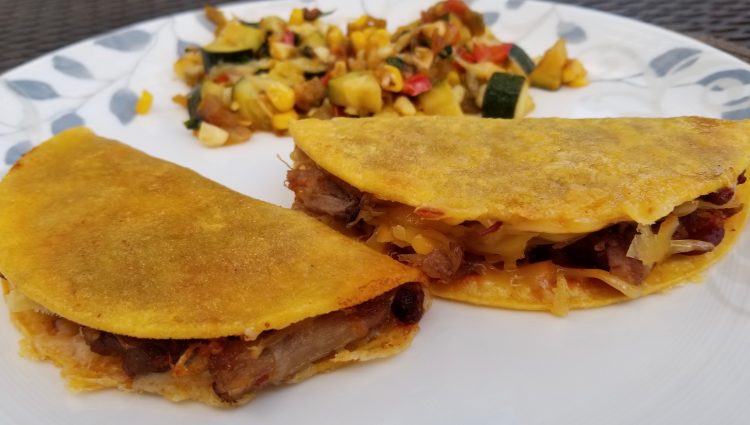 Made with carnitas, diced chipotles, corn tortillas, and cheese, grilled tacos have  flavors similar to birria tacos, with a fraction of the effort. (They are grilled in a skillet or griddle like grilled cheese, not over a charcoal fire.)

On a recent motorhome trip to Albuquerque, I struck up a socially-distanced conversation with another traveler. She described in detail the lunch she had just eaten. The very next day Jim and I went to Duke City Tacos and ordered the birria tacos. They were delicious!

According to Wikipedia, birria “is a Mexican dish from the state of Jalisco. The dish is a meat stew traditionally made from goat meat, but occasionally made from beef or mutton. The dish is often served on celebratory occasions, such as weddings and baptisms, and holidays, such as Christmas and Easter. Preparations techniques vary, but the dish is often served within corn tortillas, onion, cilantro and lime. The meat is marinated in an adobo made of vinegar, dried chiles, herbs, and spices before being cooked in a broth.” Adobo sauce looks like barbecue sauce and taste like chipotles.

When I googled “birria taco recipes” to make them, I quickly realized this is not a dish to make in a one-butt kitchen. The recipes showed cooking times ranging from 2 hours to 16 hours and 50 minutes.  Various cuts of meat — I found recipes that used beef shank, chuck roast, short ribs, oxtail, mutton, or pork shoulder — are braised in adobo sauce for hours. The shredded meat is then placed on tacos with cheese and fried in a skillet. The adobo stew is used as a dipping sauce when they are served.

Let me be perfectly clear. My grilled tacos are NOT birria tacos; they are simply inspired by them. If you want the real thing, google “birria tacos near me” and go try some.

My recipe takes about 30 minutes to make, not hours. I used Del Real Carnitas for the meat, cutting my cooking time by any where from 1 hour and 30 minutes to 16 hours and 20 minutes. This slow-cooked Mexican pork can be purchased at most grocery stores, including Walmart, King Soopers, Costco, and Sam’s. If I’m cooking for the two of us, we’ll have leftover carnitas, which are great in carnitas nachos, chili rellenos casserole, or carnitas poppers.

I experimented with every cheese I had on hand: cheddar, smoked gouda, Manchego, Dubliner, queso fresco, and several pre-shredded cheeses. My personal favorite was Beemster smoked gouda that I’d picked up on a whim at Costco, but they were all good.

I smeared a tablespoon of La Costeña Diced Chipotle Peppers on each tortilla rather than making an adobo sauce.  The grilled tacos are tasty as is or you can top them with pico de gallo, guacamole, Bitchin Chipotle Sauce, salsa, or your other favorite taco toppings.

Prepare Del Real carnitas according to directions on package. Shred any large chunks into bite-sized pieces.

Spread one tablespoon diced chipotle peppers or adobo sauce on each tortilla. Add a thin layer of carnitas. Top with shredded cheese.

If you use street tacos (small white corn tortillas), stack them like a sandwich, smearing diced chipotle peppers on the inside of

Place the griddle over two burners and heat over medium-high flames.  Use a Wide Spatula to gently place the tortillas on the griddle. After a minute or two, you may need a second Spatula to help fold the taco. Push on the top of the taco with a spatula to compress it.  Let it cook for a minute, then flip it over and cook for another minute.

Serve with your favorite toppings.