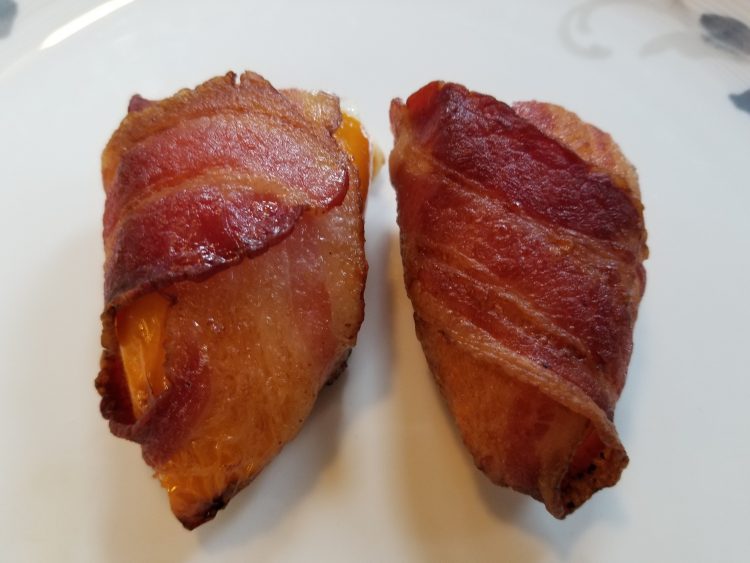 When I’m looking for a quick meal, Del Real Carnitas hit the spot. This slow-cooked Mexican pork can be purchased at most grocery stores, including Walmart, King Soopers, Costco, and Sam’s. If I’m cooking for the two of us, we’ll have leftovers.  This recipe for carnitas poppers resulted from numerous experiments with what I had on hand when I needed to use leftover carnitas.

After playing around with several variations of this recipe, we liked it best with carnitas and a mixture of shredded cheddar and cream cheese. I’ve also made it several times with just carnitas and cheddar, which is a close second. Use whichever combination appeals to you. If you prefer a different kind of cheese, go for it! This is all made-up stuff anyway.

Another variation is to use one half of a pepper for each popper rather than a whole one. They’ll be a bit smaller that way, perhaps more fitting as an appetizer.

Bacon lovers (that’s us!) might prefer to cover the entire popper with bacon, but you could also use a half strip to wrap around once.

I’ve tried making this in my home oven using convection, RV oven, and charcoal grill.  If good looks are of utmost importance, go with the home oven.

The bacon took longer to get crispy in my RV oven, and as a result, some of the exposed pieces of carnitas were a bit shriveled, but still very tasty. You may want to turn on the fan and open some windows to avoid the smoke alarm harassing you and your closest neighbors.

On a grill, you’ll need to turn it several times to evenly cook the bacon. The bacon might get misaligned or a piece of cheese or carnitas may fall out. It tastes great, but it may not be as photogenic.

Preheat oven to 425 or convection oven to 400.  Place parchment paper or aluminum foil in the pan for easier cleanup.

Mix shredded cheddar cheese, (cream cheese, if desired) and carnitas in a bowl.  Fill the peppers with the cheese and carnitas mixture.  Wrap bacon around it, securing the bacon with wet toothpicks if desired (recommended for grilling). Place poppers on a wire rack in a rimmed baking sheet.  Cook until bacon is crispy, about 15 minutes in a convection oven, longer in an RV oven or grill.